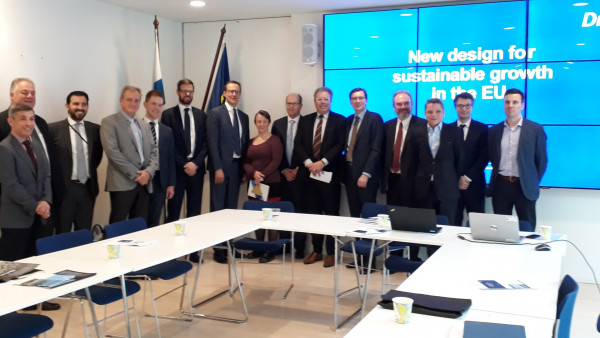 On Tuesday, 19 February 2019, Industry4Europe representatives met with Janne Känkänen, Under-Secretary of State for EU and International Affairs at the Finnish Ministry of Economic Affairs and new Chair of the Council High Level Working Group on Competitiveness and Growth.

The meeting addressed priorities for the Finnish presidency, due to start in July 2019, with identified critical topics including well-functioning and fair market and strategic enablers such as transformation to a low carbon economy, digital competitiveness and skills for an inclusive society. Finland takes the Presidency during a period of legislative disruption, with European Elections, and will work towards creating 5 year targets for European Commission development.

The coalition also introduced its publications on Indicators and Governance to support decision-making and discussions throughout the Presidency. Discussions during the meeting included the role of sustainable financing as key to delivering return on EU strategies for growth, the key role for skills development as part of inclusive society, connecting with citizen concerns and creating a strong narrative for the role of industry and Europe in delivering benefits from the EU to citizens.